You are here: Home / Library / Dr. Bob and the Good Old Timers 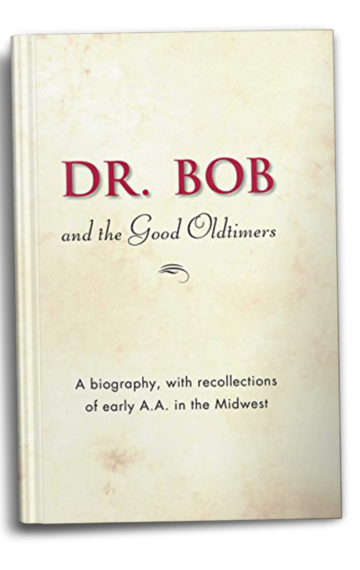 Should be required reading for anyone with three years sobriety, in my view.

Alcoholics Anonymous, by its very nature, could not have been founded by one person. Its essence is sharing. Therefore, Bill W. and Dr. Bob are always referred to within the Fellowship as the co-founders. So far, among the majority of A.A. members, the Ohio surgeon has been less well known than his partner. He died in 1950, when A.A. was only 15 years old. But his influence on the whole A.A. program is permanent and profound.

This book gives a portrait of Dr. Bob as full-sale and balanced as possible—for the most part, in the words of those who knew him personally. The young man who grew up in Vermont became a hard-drinking college boy, then a medical student fighting the onset of his own alcoholism, a respected physician, a loving but increasingly unreliable family man, and at last a desperately ill drunk. He was without hope until he met a stockbroker from New York—Bill W., who urgently needed a fellow alcoholic to help him maintain his own sobriety.

His story then becomes inextricably entwined with that of Alcoholics Anonymous: from a fledgling Fellowship to a powerful spiritual movement with a worldwide reach. Dr. Bob’s story remains instructional and inspiring to those who read it today.

Get Andy C's latest thought-provoking articles in your inbox.